Categories: Phones , Smartphones , Do you know

One year after the debut of its super-tall Xperia 1, Sony is back with a successor, the obscenely titled Xperia 1 II. In Europe the handset will be Sony’s first to support 5G, where it will be able to connect to sub-6GHz networks. Sony is keen to emphasize the photography capabilities of its flagship smartphone, and there are also some neat hardware inclusions like a 3.5mm headphone jack and support for wireless charging. (Both of those were missing from last year’s handset.) It also announced a new mid-range handset called the Xperia 10 II. In the US, where the flagship 1 II handset will be 4G only, Sony teased a separate 5G device called the Xperia Pro.

In an era of 108-megapixel smartphone cameras, the 12-megapixel triple-camera array found on the back of the Xperia 1 II risks coming across as under-specced, on paper anyway. But Sony has what it thinks are a couple of tricks up its sleeve, thanks to features brought over from its Alpha lineup of cameras. The first is that the phone supports up to 20fps shooting in burst mode (a first for a smartphone, according to Sony), and the second is the ability to calculate AF/AE at up to 60 times per second. The eye-tracking autofocus returns from last year and now works with animals. Sony says that this year the camera’s autofocus covers 70 percent of the frame. 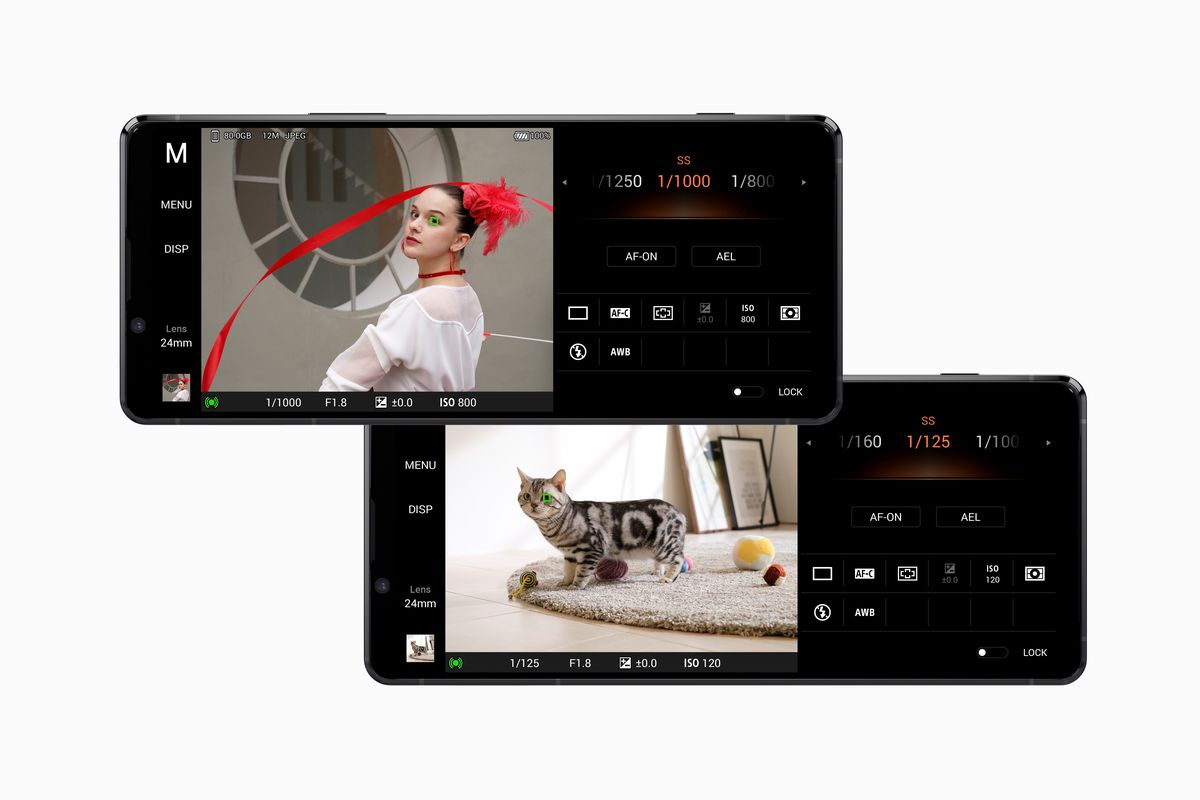 Sony also has a new Photo Pro app, which joins the Cinema Pro app that it debuted last year. The aim here is to give you more manual control over your photography with what Sony says is a similar interface to an interchangeable lens camera. Of course, you can also take photographs using a more typical smartphone camera interface if you so choose.

In terms of camera hardware, the phone has three rear cameras and a 3D iToF sensor to assist with focusing. All three cameras feature 12-megapixel sensors, similar to the iPhone 11 Pro. On the Sony Xperia 1 II, the main 24mm f/1.7 camera has a larger 1/1.7-inch sensor, similar to the 1/1.76-inch sensor Samsung is using for the main camera on the Galaxy S20 and S20 Plus, though it’s not as large as the 1/1.33-inch 108-megapixel sensor found in the Galaxy S20 Ultra. Alongside its main sensor, Sony’s new phone also has a 16mm f/2.2 ultrawide camera, and a 70mm f/2.4 telephoto camera. On the front, there’s an 8-megapixel selfie camera, and on the side there’s a dedicated camera button.

If you’re shooting video rather than photos, Sony’s new device ups the maximum frame rate for 4K recording to 60fps, and 120fps for 2K recording. Sony also says the phone should be better at recording audio, thanks to its ability to filter out wind noise.

On the audio side, Sony has announced that the Xperia 1 II is the world’s first smartphone to come with built-in 360 Reality Audio decoding, the new audio format that Sony launched last fall. This is an object-based spatial audio format that makes it appear as though audio is coming from all around you. Sony says that you’ll be able to stream the format on Tidal.

While its new flagship won’t support 5G in the US, the company did tease a mysterious new 5G device called the Xperia Pro. Although it looks a lot like the Xperia 1 II, Sony is pitching the Pro as an accessory for broadcast video cameras, with an HDMI input that allows it to work as a camera monitor. Then, Sony imagines you’ll be able to use its 5G connection (it supports both sub-6GHz and mmWave) to upload video footage to wherever you need it.

It’s an interesting idea that could pick up where RED failed with its more ambitious Hydrogen phone program, but it sounds like the product is still a concept for the time being. Sony didn’t have any information to share on potential release dates or pricing, and it even said that it hadn’t decided whether it will be selling it through its regular consumer channels.

Finally, Sony also has a new mid-range handset called the Xperia 10 II. It’s got a slightly smaller 6-inch 21:9 1080p OLED display, a less powerful Snapdragon 665 processor, and a smaller 3,600mAh battery. Although it’s also got a triple-camera array with the same combination of focal lengths, two of them have 8-megapixel sensors rather than 12 megapixels. It also keeps the 3.5mm headphone jack, but there’s no sign of wireless charging. Sony plans to ship the phone in “select markets” this spring.